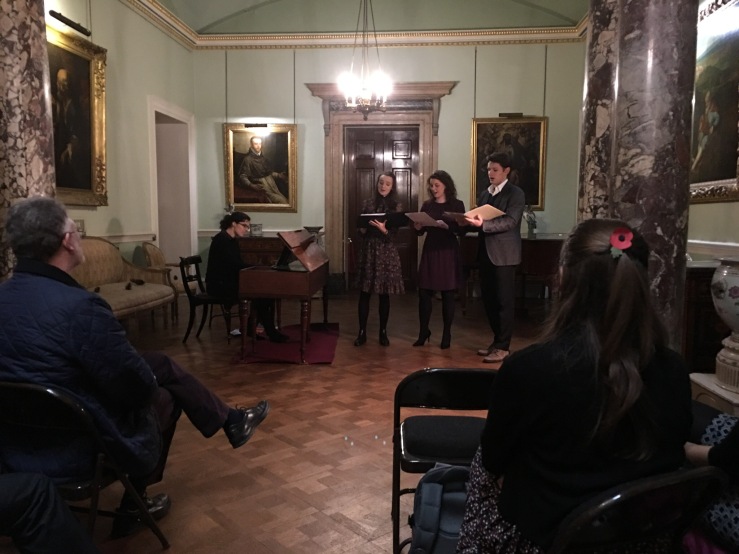 Yesterday I attended and spoke at the third of the Sound Heritage study days, at the marvellous Tatton Park, in Knutsford, near Manchester. The day started (after introductions) with a presentation from Candace Bailey, Performing Paris in Antebellum Charleston. She is currently exploring the domestic music of women across the Southern United States in the 19th century. Not just white women, but also (after the civil war and emancipation) women of colour.

In 1821, a house was built that became known at the Aiken-Rhett house, the largest urban plantation era dwelling that survives. Like the National Trust’s Calke Abbey, as the family fortunes declined, they simply closed up rooms and retreated into fewer and fewer spaces, until, when it was sold for $1 to the Charleston Preservation Trust, only one room was occupied. One of those closed up rooms contained a number of volumes of bound music.

Harriet Aiken, aged fourteen, had a surprising repertoire. Most of the sheet music available in Charleston, North Carolina in the 19th century was of British origin. Which is not to say there were no European composers included, but rather than the musicwas published in London. One of Harriet’s volumes contains sheet music exclusively printed in Belgium, and most of French Opera. Indeed, hers may be the largest collection of this sort of music in the world. Another volume similarly contains most French music, there is just one English piece, which looks like it was inserted after binding. Where did all this music come from?

Mrs Giraud, and Miss Bidon were regularly performing in Charleston at this time, and it seems Harriet might have been a student of Giraud. Later when Harriet got married, she went to Paris.  On her return, the decorations and a new art gallery full of European art seem to suggest that the family worked to preserve French (Huguenot) culture, which goes against the usual perception of Southern states being the last bastion of British culture in America. In fact I remember, from, I must admit, creating a character for an Old West themed tabletop RPG, that Charleston had a considerable population of French origin, and even today boasts an impressive Huguenot church. The Anglic culture of North Carolina dictated music taste though, except it seems in the Aiken house, due not just to Harriet, but later Henrietta Aiken, who never bound her sheet music, which suggest she kept playing it. About a thousand pieces, again most from France.

I spoke after Candace, all stuff you’ve read before if you are familiar with my blog, recapping my motivation for study, my affect wheel, music in games, then taking a detour into some work I’m currently involved with at the Vyne (which I’ll write about when it’s done), then back to Kernels and Satellites, and introducing my Chawton project. I spent too long on the Vyne (actually I lie – I spent too long on supposedly “witty” asides, playing to positive reactions from the audience) so in my rush to keep to time, I forgot the most important narrative atom for this particular audience: that music in heritage interpretation is mostly used as a satellite in the narrative, but it has the power to be a kernel, if interpretive designers allow it.

After lunch, we had a lovely recital from student at the Royal Northern College of Music (which was the neighbouring institution, when I was an art student in Manchester. My favourite piece (though I may be prejudiced by its title) was a solo, called Crazy Jane, which tells the story of a woman who, abandoned by her lover, goes mad. It was one of the most popular pieces of sheet music of its day, so nothing changes, does it, in popular music choices – “my man done done me wrong” is still a staple today.

Listening to it though, made me think about one of the challenges of using historic music for interpretation, which especially relevant as I try to use music to make meaning at Chawton. I struggled to understand the lyrics, despite them being in perfectly accessible English, because my ear wasn’t trained to listen through the “operatic” styling of the music (and lets face it, I’m going deaf).  So the meaning of the song was lost to me, and because if changing musical semantics, not even the tune said “sad song” to a modern listener.