It’s a funny feeling time. The calendar pages seem to flicker by as the year rushes towards its end, the the deadlines for various aspects of the Chawton project loom ominously. On one level I worry I have achieved so little and yet, on an other so much has gone on. So it seems inevitable that this post will consist of a number of short catch-ups on various aspects.

First of all, I’ve got a name for what we offer the public next year. I’d been struggling to think of how I’d present the project to Chawton’s visitors in a way that meant something. I’ve been calling it “the project”, “my experiment” or a “responsive environment”, none of which would sell the concept to potential participants. But a few weeks back I met a colleague who told me about an experimental opening of the Roundhouse in Birmingham. Working with a couple of performance poets, they opened the building for sneek previews that they called “Un-Tours“.

The National Trust’s Un-Tours are not quite the same as what I’m planning of course. But I thought it was a perfect name: visitors will explore the house with a volunteer, but the volunteer won’t be a guide leading them from room to room. They choose where they go, and what they look at, and the volunteer responds to their interests with the relevant natoms. So my volunteers are Unguides, and the tours, Untours (I decided we didn’t need the hyphen). I told my colleague there and then that I was nicking the name.

The next exciting thing that happened was meeting Ed Holland. Ed is studying Music at Southampton, and was looking for a studio project. He has agreed to help me with the sound natoms. I met him for a second time yesterday, with the always brilliant Jeanice Brooks, and we started to break the musical narrative, focused on domestic life at the turn on the eighteeth/nineteenth centuries, which will reference the Jane Austen connections that Chawton has, without being about her (given there’s a museum dedicated to her just down the road).

Of course between those two meetings with Ed, I’ve been thinking a lot about sound. As long time readers may be aware, I’m keen to put as few barriers/filters as possible between the visitor and the space they are in. So my preference is always for speakers, but Ed suggested that headphones may offer a more immersive soundscape for less money.

However, one of the key investigations of this project is to investigate a set of “contention rules”, for when more than one visitor/visiting group enter the same space with different story needs. Of course, if everyone were wearing headphones, that soundscape contention wouldn’t be an issue. Which may be a good thing (for visitor experience) as well as a bad one (for my investigation). I’ve also been thinking about other ways my paltry budget might limit what we can achieve. I hope to store all the assets on the web (in Scalar currently) so that a volunteer Unguide can use any smart device to participate (BYD). But of course, that will (I’m thinking – you may know differently) limit each Unguide to delivering just one channel of sound to his/her visitor group. Of course that limits Ed’s ambitions for a multi-channel directional soundscape, but he is making contact with some of the sound guys in our School of Engineering to see if there’s any cool stuff (or speakers) we can use at Chawton.

Assuming we don’t get to borrow anything cool though, I’ve suggested that Ed:

My budget, though tiny, is flexible (it’s my own money) so, I could maybe stretch to something in between the two extremes, if it was something that offered some of the functionality Ed would really want, and maybe had some domestic life afterwards.

The thing that I’ve had most trouble with these last few weeks is the story. I wanted to have at least three narratives – one of the history of the building (and I thought an early 20th century owner, Montague Knight, would be the easiest focus for that); one on Women’s Literature, and the Austen one, mentioned above.

I’n my innocence I thought that I would quickly knock-out an emotionally compelling Montague Knight narrative, but after weeks of reading, arranging and re-arranging, I’ve realised that (duh!) real life stories don’t comply with literary “rules”. Or rather, I’ve realised that maybe my standards, my expectations, for this were too high. I’ve wasted time trying down a rabbit hole, trying to craft a story that I was going to muck up anyway by letting visitors make their choices. I was crafting a traditional guided tour, not an Untour! So, I’ve decided on a different tack. Instead, I’m going to spend some time analysing the natoms I already have, and attributing a story beats to each one. The story should (after all) be procedural.

The outcome of this experiment isn’t (wasn’t ever) meant to be the best interpretive experience. all it is is a step towards the understanding how procedural narratives might work in historic spaces. 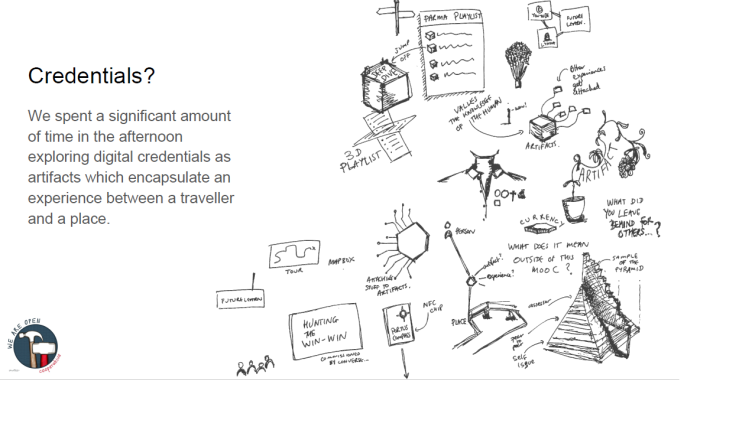 Last week, went to Winchester School of Art to meet with some university colleagues to join a couple of facilitators from We Are Open, for a Thinkathon. “What,” I hear you ask “is a Thinkathon?”

I guess in less enlightened times, we might have called it a brainstorm, but it was a tight, friendly discussion/workshop to help us think through some challenges we’d set ourselves about open heritage scholarship, to wit (quoting from Graeme’s brief):

One thing that set it apart from your more traditional brainstorming session was the presence of Bryan from We Are Open, who constantly drew as we (and he) talked, projecting his doodlings up onto a screen so we could watch our ideas take shape as we came up them. Some of his sketches illustrate this piece.

So what did we conclude? Well the second half of the day went down a credentials rabbit hole, which was fun (and interesting) but I think, probably not yet where we are in the project. The Portus MOOC which in the new year will have its fifth intake, has been a great experiment in open education, and more Heritage Organisations are taking their first steps into those waters. But the challenge (I think) is to test the willingness of heritage organisations to think “open” (at least in the digital world) rather than strictly controlled and moderated. I’d like to get these guys from We Are Open into a room with my professional colleagues, and with others from Historic Royal Palaces, English Heritage etc. I learned that week that John from We Are Open actually started is working life with the National Trust, before moving on to organisations like Mozilla, so it would be fun to join the circle and get him involved again.

Can the PORTUS project afford it though?