Today is the last day of the Opposites Attract challenge, and this afternoon Nashwa and I will present our prototype game and see what the others have done. Nashwa was up until the early hours debugging and tidying up the prototype and we created in MS Visual. But she still had time to record this YouTube runthough, so you can see it in action:

The sound on this isn’t brilliant I’m afraid, and its quite hard to hear Nashwa’s narration. But hopefully you’ll get the gist of what’s going on.

To find out about some of the other collaborations, check out the Opposites Attract blog.

After a number of posts related to either Opposites Attract or Chawton, its time to write about something else. On Tuesday, for work I took a number of Visitor Experience managers to the South Bank Centre to explore The Wondercrump World of Roald Dahl. No photos were allowed so I can’t share any, you will have to visit the website. Well, you will have to visit, because the website can’t do it justice.

It’s an experience designed for families and children aged seven to twelve, so our guide did well to deal with seven heritage professionals and two other adults. We promised to be on our best behavior, to do as we were told, to stay close and not to run off, and then the red velvet curtain was drawn back and we were invited into Roald Dahl’s world. As we loved from space to space we were drawn into immersive environments, from a room filled with boxed memories of Great Missenden, into a boarding school classroom, the North African desert, deep dark woods, and progressively more surreal spaces.

As we went we were accompanied by an enthusiastic guide, and the mysterious, ominous and occasionally very silly disembodied Narrator. Between them they gave us a potted biography of Dahl, illustrated by just enough reproductions and original objects from the collection of The Roald Dahl Museum and Story Centre. It was a masterclass in storytelling, not cluttering the visitors’ perception with too much stuff, but drawing attention to key moments, and creating a mythic significance on how these turned a gangly boy into an extraordinary writer.

I said we weren’t allowed to take photos, but I remember that in fact they did say we were allowed to take them in the last room, a space where visitors could get creative. But when we got there we were having too much fun – personally I spent all my time with the wall of self-inflating whoopie cushions. Then a short trip in a (not) Great, (not) Glass elevator brought us back to the real world.

It runs until the 3rd of July. Its definitely worth a visit if you have kids who’ve read the books, or even National Trust staff to take on a development day!

Back at the University for the second day of PGRAS, the post-graduate archaeology symposium which I spoke at yesterday. My talk didn’t go brilliantly well. Despite my preparation last weekend, producing a script as well as my slide deck, I went off-script about a third of the way through, and didn’t get back on it, so I feel a lot of what I had meant to say went unsaid. I often find this when I a script myself, it’s seems I stick more to what I plan to say when I only use bullet points and ad-lib around those. When it’s a full script something in my mind rebels and I end up saying nothing in the script.

So, here’s what I meant to say:

Its been a busy week at work and university, with Chawton and preparation for a presentation at school. And my work for Opposites attracts has suffered, first pushed beyond last weekend, when I had planned to do it, and then made ineffectual by tiredness after work.

So I only finished what I’d planned to finish last Saturday, today, moments before going into to my presentation (which probably wasn’t a good idea as it turns out, but that’s another story.)

Nashwa an I had started off by sketching out a quick flow diagram of the parts of the game that we actually planned to create for the prototype:

Nashwa had already started to create some of the basic functionality in MS Visual Studio. She zipped the project over to me and gave me a brief tutorial when we spoke last week. My job was to add the story, both visually and in narrative.

My digital drawing Fu wasn’t with me this week, so after a few disappointing attempts to create icons digitally, I scanned some of my preliminary sketches, cleaned them up a bit and shrunk them down to 100×100 pixel bitmaps, with transparent backgrounds. I want to flip the first mate image, so that I can have him facing left when he is a button, and right when he illustrates the timer. I’ll do that this weekend.

The other thing I want to do this weekend is fettle the achievements screen (not pictured here) to create greyscale images of the rewards you have not yet earned, which become colour when you earn them. I also want to add some indicating the higher levels that we are not actually creating.

I’ve finally broken the Chawton House Library guidebook down into it’s component narrative atoms (or natoms). I’ve got plenty more to do this weekend. In order:

But right now, my Gero has just pinged that its time to stop work, so a walk is in order.

Just a short post to share this image of a natom network that is slowly getting more complex as I break the stories from the Chawton’s guidebook down. I’m about a third of the way though.

As I go I’m looking especially for natoms with a certain emotional resonance, that might become some of the emotional triggers that really hook people into the place’s story. So far a few things in particular have had the effect (on me) that I’m looking for: a message to the future from Montague Knight, the nursury rhyme, Lucy Lockett lost her pocket, and the tragic death of Eleanor Verney.

Lots more work to do though…

I’ve been disassembling Chawton House Library’s guidebook and handout down into Natoms, as the very first stage of my project there. Natoms are not my idea, but a concept from Southampton colleague Charlie Hargood. However, for my purposes I’ve distinguished between Persistent natoms (or P-natoms) which are physical and thus, for the a heritage visitor, stay in one place and do not change, and Ephemeral natoms (or E-natoms) which are not tied to a particular place or even form, they are any media which can be digitally transmitted and shared, such as text, video or music.

To break the guidebook that Chawton supplied down, I’m currently using Scalar, for reasons I explained in an earlier post. It took a little time for me to work out how I should best use it, and to be honest I think I might come unstuck when I start distinguishing between kernels and satellites, but right now I’m getting into the flow of it, so before I went too far, I thought it would be good to share.

First of all I wanted to to some of the P-natoms in place. These are the rooms that our visitors will be exploring. It was very easy to list the rooms, and soon I had that list of rooms, each tagged as a P-natom, looking like this in Scalar’s useful “connections” visulisation:

But I had a slight crisis of confidence about how best to illustrate the links between spaces, or as Bill Hillier puts it, the permeability. Scalar allows simple hyperlinks, but doesn’t visualize them, or make them reciprocal. It also has a Path function, but that is only one way, really for stringing natoms together into a long-form text. So in the end I went for the program’s tagging function, which is quite sophisticated in distinguishing between items “being tagged” and “tagging”. Once I’d tagged the transitions betwene the listed spaces, my visualization looked like this: 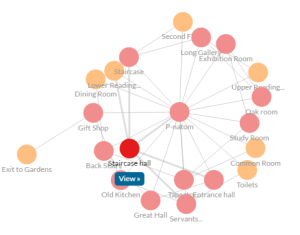 I added the gardens at this point. I plan to keep my experiment within the walls of the manor house itself, but some doubt, or fear that I wasn’t future-proofing the model, made me put them in, as the exit form the gift shop.

These spaces are by no means all the P-natoms. More of the the collection will go in later. Next however I wanted to try adding some E-natoms. And that meant starting by breaking down the guidebook text. The first part of the guidebook was an essay, a brief chronological history of the place. Broken down into its constituent parts, and tagged as E-natoms, this is what that essay looked like: 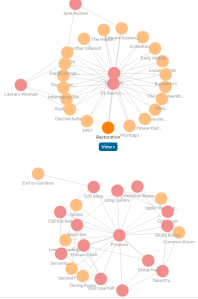 As you can see, at this stage there is no connection between the the new E-natoms and the P-natoms, or between the story and the place. However, already some (but at this stage surprisingly few) of the e-natoms were suggesting engaging stories: which I’ve tagged “Literary Women” and “Jane Austen”. But look what happens when you start adding in parts of the collection, in the spaces in which they are displayed, and their associated stories. To two P and E-natom “solar systems” start to join together:

This is after the collection in just one space, the entrance hall, has been broken into the natoms. Its going to get a lot more complex as work progresses.

I said I’d return to the subject of text. Over the weekend, I’ve been wrestling with the words that we should use in our app. The challenges are threefold:

So, instead of building a tribe, I’ve to exploring an inhabited island. (Yes, it is still rather colonial, but lots of communities around the world have reached new lands by sea.) Thus, rather than gathering the tribe on the first level, we’re getting to know the crew, and building our ship.

Welcome Captain! Are you ready to gather your crew, build your ship, explore the seven seas and built a new settlement, your Community of Practice?

Time is short and there’s so much to do.

Your backers have hired you a crew, and given you money enough to build a ship. But time is tight, you must discover land and build your community before the rations run out.

When you set sail (course starts)?

When must you finish?

Alternatively, we could have a plain English input screen, and then translate the input data into something like this:

Your backers have hired you a crew of <total number of students>, and given you money enough to build a ship. But time is tight, the good ship <course name> must set sail on <course starts> and the rations will run out buy <course end>.

Check the [ship’s papers: link to task list screen] to see which tasks you must complete before you can properly start exploring.

You need to get the measure of your crew. Do you have people who can be look-outs, depth sounders, navigators, riggers and jacks? Get them to work out their [preferences: link to VARK questionnaire] and share their preferences. Tally the numbers of each here:

(if total <(numbers of students)) Have you got the measure of ALL your crew?

(if total =(numbers of students)) Task finished! Your crew manifest is complete. Now its time to plot your voyage.

What do you think Nashwa? Should I continue in this way?