I’ve had the flu for the last week. A real bout, which knocked me out on a train at the weekend, and had me in bed, sweating and shivering for the best part of the week. So I’m a blog post or two behind, and that’s not all I’ve got to catch up on. Today is the only day I’ve been able to do anything useful at all.

I was able to read a bit though, little and often. And one of the little bits I read was this item about Ed Catmull of Pixar fame, explaining why Virtual Reality isn’t a storytelling medium. Though he doesn’t use the words, he’s obviously talking about the Narrative Paradox. Storytelling is linear he says, interactive experiences for something else.

That doesn’t stop me wanting to try imposing a little linearity on immersive experiences though. And to that end, just as I was (it turns out) going down with the flu, Graeme my super supervisor was persuading me to have a go at creating, a design document for my Responsive Environment idea. I haven’t managed to get as far as I want by today, but I have taken a first step, trying a rough diagram (really rough – not a flow chart, despite a passing resemblence) which I thought I’d share here. 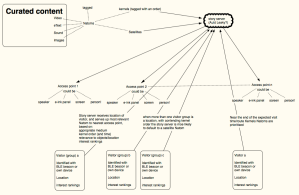 Hmmm, it looks quite small on the upload, lets see how readable it is when its published. If it is at all readable, I’d appreciate it of anybody can tell me whether it makes an sense.

In the meantime, let me describe it in words. I’m looking to test how people react to being tracked around a heritage environment in return for the reward or a more tailored experience. While I was putting the diagram together I had in my head the example of Emily Van Evera and Martin Perkins’ recital/presentation on Lady Charlotte Bridgeman, that I wrote briefly about last time.

That was carefully crafted linear storytelling, wherein Martin and Emily curated a mass of evidence and anecdote into a presentation that had emotional impact. But it was designed for a seated audience in a concert hall, how might it work in a heritage setting? It could be a guided tour, or an audio guide, but could it also be the story told in a responsive environment, where people were free to wander and focus on the thing they were interested in, and yet still get at the emotional heart of the story before they finished their wanderings?

During the recital we were presented with story elements (lets call them Natoms – narrative atoms, as Charlie Hargood does) in all sorts of different media: documents (which could be original or images); portraits (ditto); text (spoken in this case, but it could be printed); sound (live music in this case, but it could be recordings); and even original instruments. There would of course have been similar media that appeared in the research but didn’t make the cut into the presentation. And  there may be a few curios that aren’t directly related to the story but possibly interesting connections  – the Elvis track that used the same tune as one of the songs we heard, for example.

Imagine all those (well not the originals) loaded into a media server. Each tagged with; connections to other Natoms; connection to the originals items that may be onsite; relevance to particular spaces on the site; and, most importantly, a few tagged as “kernels” which must be experienced in a particular order.

Now, were I to ask Emily and Martin, they might well say that everything they included in the presentation was a “kernel”, but I’d push back on that. (Thinking about it, I’d love to actually have this discussion with them and find out what they think the kernels might be.)

Anyhow all the data, all those Natoms, are sitting on the server, waiting to be served out to various access points. The access points might be e-ink panels replacing traditional museum text/graphic panels, speakers, screens, or even people, which devices of some sort to tell them about the visitors they meet.

Finally we have our visitors. Each visiting group (which may be an individual, a couple, a family or other group who intend to stay together during most of the visit) gets something, a BLE beacon, or wi-fi device that locates them around the site. They don’t use this device at all, just carry it around which them. They might complete a short questionnaire at the start of their visit to gauge their relative interest in the broad topics of the story, such as music, life in the country house, gender issues, etc, or even flag up emotional triggers that they don’t want to hear about for personal reasons, like domestic abuse, or cancer.

I’m running out of time now. So I’ll continue this in the next post.