A couple of weeks ago we went to the Great Western Brick Show (which used to be the Great Western Lego Show, until one party or the other decided not to license the Lego trademark). This takes place annually at Steam, the railway museum in Swindon, and is just one of a growing number of large events run by AFOLs (Adult Fans Of Lego). It’s full of impressive models, but this year’s triumph was a huge diorama of a section of Hadian’s Wall.

It was built by Bricks to the Past, a collective of Lego-builders with a particular interest in history. Their inspiration comes from University of Newcastle’s FutureLearn course Hadrian’s Wall: Life on the Roman Frontier. I’ll have to try to persuade them to enroll on Southampton’s Portus course next time it runs, though they are probably looking for a non-Roman project next year. 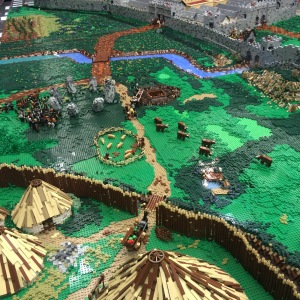 The massive model depicted aspects of life on both sides of the wall, with a Pictish village and Iron Age barrow by Simon Pickard,  on the “uncivilized” side, and a Roman Villa by Steve Snasdell on the other. 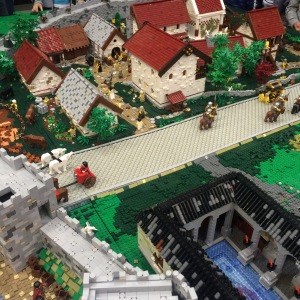 I had a brief chat with the builders at the show and they talked about some of the compromises they made with scale, particularly on James Pegrum’s fort, so they they could fit interesting features (for example Roman latrines) into the diorama. 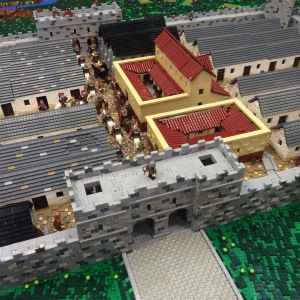 They also included features for future minifigure archaeologists to find, around the perimeter, people could peek underground into charnal pits and burial sites.

They had no idea how many bricks they’d used in the model, but it looked like hundreds of thousands. Having struggled with the roof on my Portus Magazzini model I was particularly interested in their imaginative use of cylinder and hinge bricks (among others) to create a variety of roof styles.

Apart from the diorama, the group also made other Roman archeology inspired models, such as a centurion, a Romulus and Remus plaque and a fragment of tiled flooring.

All in all, it was an inspiring piece of Lego visualization.

3 thoughts on “Hadrian’s Wall with Bricks to the Past”