On Thursday, I attended the second day of the Archaeology department’s Postgraduate  symposium, at which every PhD student is expected to deliver an annual presentation on their research. Part timers like me are required to only present every other year, so this time I was an audience member only, and Chair for one session. I hadn’t managed to go to the first day, because I was at work. Here are some selected personal highlights of the day.

Eleonora Gandolfini kicked the day off introducing her work on MOOCs, local communities and cultural heritage. She’s looking at how the global might become local to engage communities in the archaeology of what is close to them – for a start, she’s been creating text translations of our Portus MOOC into Italian. Here presentation included a couple of pleasant surprises for me: the first mention I’d heard that Portus has a past life as a safari park (which I’m sure wasn’t news to most of my peers), and a reference to, and display of, my virtual Lego model of Building 5!

Dan Joyce followed with a review at all the low-cost technology that can be used in archaeology, then Danielle Newman looked at using ethnographic techniques to interview archaeologists on public engagement. Her mention of the difficulties of how different professional communities using terminology differently struck a chord with me, interpretation, for example, is word that I and my archaeologist peers use very differently I think.

For example, Trevor Rowe talked about how Augmented Reality, which most people only think of as an not-quite-there-yet technology for interpreting the past to visitors, might be used to help archaeological interpretation of data while on site. Later in the day, when Elizabeth Richley was talking about her work combining different data sources in 3D, I wondered when her work would be combined with Trevor’s to create “Archaeologist Goggles.”

In the following session, the presentation that stood out for me and, it seemed, excited the room was Leah Holguin’s talk on Disappearing Landscapes of the Gobi Desert. It seemed a lot of people wanted to share her adventures, and I must admit, with all that sand and isolation, it felt like “real” Indiana Jones style, archaeology.

I chaired a session on walls, with Nicholas Dugdale skyping in to present his analysis of Roman marble shipping, Katherine Crawford and Isobel Pinder with two different takes on Roman religious processionals, and James Miles updating us on his structural analysis of Winchester Cathedral.

The final session ended with a really tough question for Peter Brugger who is researching the use of 3D printed versions of artefacts in museums. He was challenged with a question that amounted to “what’s the point?” After all, it doesn’t weight the same, or even feel the same, its by no means a replica – what is the learning outcome of a visitor interacting with it? But something he had said in his presentation made me think he already had the answer, that fiddling with the plastic version drew visitors’ attention to the real thing. So I wonder if its not an interpretive medium as such, but should be considered rather more like museum lighting, an atmospheric, sensory effect that help people understand where to look.

Well that’s a whistlestop tour of my notes from the day, there were plenty of other presentations as well, but I’m off to Italy shortly, so that’s all you get from me.

So I read this the day after attending our PostGrad conference, wherein PhD candidates must present their work annually (or for part-timers like me, every other year). While I was there I said to a colleague “I wonder if I could make my presentation a location aware game next year?” and here’s how to do it. 🙂 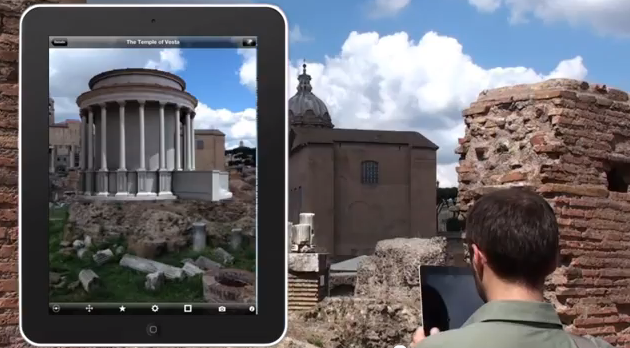 But my arms get tired.

Maybe you’ve thought, ‘Augmented reality – meh’. I’ve thought that too. Peeping through my tablet or phone’s screen at a 3d model displayed on top of the viewfinder… it can be neat, but as Stu wrote years ago,

[with regard to ‘Streetmuseum’, a lauded AR app overlaying historic London on modern London] …it is really the equivalent of using your GPS to query a database and get back a picture of where you are. Or indeed going to the local postcard kiosk buying an old paper postcard of, say, St. Paul’s Cathedral and then holding it up as you walk around the cathedral grounds.

I’ve said before that, as historians and archaeologists, we’re maybe missing a trick by messing around with visual augmented reality. The past is aural. (If you want an example of how affecting an aural experience can be, try Blindside).

Yesterday, a few colleagues and I joined a guided tour of Highgate Cemetery. The oldest, Western, half of the plot is only accessible by guided tour (unless you are visiting a dead relative,  or attending a funeral, or, I guess, you are actually dead and being interred.

It rained persistently for the walk up from Archway tube station and through Waterlow Park (where there is a lovely little cafe in what looks like an old Assembly Rooms building, suggesting a previous life for Waterlow as a nineteenth century Pleasure Grounds). It continued to rain throughout the tour, which soaked us all through (finally defeating both my waxed cotton hat and my Driz-a-bone) but only added to the Atmosphere of the place.

Atmosphere is something that the Friends of Highgate Cemetery Trust carefully nutures, repairing and restoring only a few crypts, and keeping the weeds and wild garlic back only just enough to clear the paths, balancing conservation and, as they put it, “romantic decay.”

The tour itself was given by an enthusiastic volunteer, who only let the rain get to him by the very end of the route. It was an anecdotal tour with a route that, after explaining the origins  of the cemetery, took us past bomb sites and graves old and new, explaining a little bit about some of  the families that had bought the spaces. I hadn’t realized that the cemetery was still accepting new “tenants” until I spotted Alexander Litvinyenko’s grave nearby.

The guide also explained some of the symbolism of Victorian funerary, pointing out Egyptian lotus flowers, angels holding trumpets and wreaths (the latter apparently adapted from the ancient Greek winged victory, Nike), upturned torches and Ouroboros. Towards the end, he took us into the Terrace crypt, where coffins with ostentatious furniture still occupied some of the niches.

I think this experience was meant to be the emotional climax of the tour, but it was somewhat underlined by a slightly irritable rush back down the hill, past the very first grave to be dug on the site, with a guide who was, by this time, mostly muttering about a dawdling “American photographer.”

I left feeling somewhat frustrated by imagining what the tour might have been, with all those stories, symbols and revelations to play with. I’m sure I could have paced the tour better, taking a group like ours on a journey that could really have connected us with the place.

In fact, I think I had a better “guided tour” experience when we went across to road to visit the slightly newer Eastern half of the cemetery. Here we had a quick look at Karl Marx’s grave before my colleague Sam offered, with a glint in her eye, to take us to Patrick Caulfield’s grave. This her micro-short “my favourite graves” tour ended with a better climax (or in this case, maybe punchline is more appropiate) than the hour we’d spent with the official guide.

On our way back down the hill, we stopped by the statue of Dock Wittington’s cat. A little plaque prompted us to use NFC equipped phones, a QR code, or (thankfully!) a simple sort web address to type in, to hear the cat tell her tale. Thank fully the content behind the link was worth listening too, unlike on the south downs, and responsive, in 4G equipped London. It’s one of a number of Talking Statues dotted around London and other cities. You don’t have to download an app in advance, its nothing more complex than a website, and its free.

At a little over three minutes, its overlong (at least on a rainy Thursday) but at one magical moment, it encourages you to turn around and look (as Wittington himself said he had done) down across London from this vantage point, connecting the listener emotionally with the place and the story.

I spent most of yesterday volunteering at Clandon so, in a middle of catching up on writing my literature review, just a short post today.

The Museums and Heritage show seemed more exciting this year than last, with a healthier buzz among both participants and exhibitors. Last year I left the show after only a couple of hours. This year I stayed all day, and was so engaged in conversations with stall-holders and with old and current colleagues that I’d happened to meet, that I missed out on a couple of seminars that I wanted to attend.

Apart from the free seminars, the show floor itself was alive with master classes run from the stands themselves. Like these two:

on being a better guide;

and, on writing for interpretation.

It was refreshing to see that the show wasn’t infested with companies offering “apps” as it had been for the last two years. And I spoke to most if not all those companies that remained and came away feeling confident that most of these “get it” and, to varying degree, are willing to push at the technology to better serve the visitor.