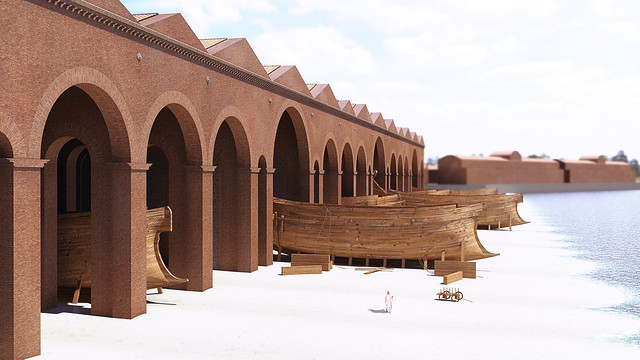 Having been focussing on my Symposium presentation, and then taking a week camping with the family in France, I’ve finally caught up with the other students on the Portus MOOC, which I’d had a sneak preview of some months back. We’re two thirds of the way through the course, which is a bit late for catching up, but never mind. The debate in the user forums below each activity has been better than I’ve seen in any other MOOC I’ve tried – rather than simple requests for help with an issue, the Portus learners have been contributing their own knowledge and experience and asking probing questions which have elicited very full and illuminating replies from the Project team.

This week, the course has turned to two aspects of the Portus Project which are of particular interest: the mysteries of “building five” and computer modelling. Building five is a large building almost 250 metres long, and (according to evidence which I won’t repeat here – if you want to know, do the course)  it may have been a boatbuilder’s shed, although no evidence has been found as to how exactly ships built in the shed might have been launched. The course also explored the activity of modelling the building, showing how computer models are used to hypothesize the shape of there is missing evidence for.

There was some debate in the forum comments about the power of CGI models of convince the viewer that this might be the ONLY truth, while the Portus team are using CGI to explore all the possibilities. There is an argument that the more sketchy archaeological drawing is inherently less “final” and more pregnant with possibilities, but I’m not sure I’m convinced by that argument. But I am convinced that the act of modelling is more informative than the finished model, whether its created by computer or pen and ink.

So how easy would it be to give all the MOOC learners an opportunity to get their hands dirty with modelling? The sort of software used by the Portus team comes with expensive licenses and a steep learning curve, which likely put it out of the reach of most home learners. But there alternative 3D modelling packages. My colleague, Javier Pereda suggests two on-line 3D modelling programs that come with their own tutorials: Tinkercad – a Web based 3D system which is a simplified version of 123D from Autodesk; or 3D Tin – also Web based, and a little bit more complex, but with the difference that this app can export the models to other sites like Thingverse, and from there, maybe 3D print their models.

Could the Portus team create 3D models of some of the actual finds from Portus, standing remains, and the other evidence they’ve discovered about the shape of the buildings’ footprint, and enable their on-line students to start creating their own 3D models? I must admit I took a more playful route, which resonates with my recent reblog.

After a discussion about trying to build Portus in Lego minifigure scale, I quickly worked out that even my son doesn’t have enough bricks for that. So I turned to Lego Digital Designer (which I guess is a 3d modelling package – but, for me at least , one which a less steep learning curve), and after spending a day and a half (!) creating one corner of  Building Five to virtual minifigure scale, I’ve produced this:

Not as impressive as Grant Cox’s render at the top of the post. But I’ve also learned two things: that the engagement of playing with the evidence and the Lego System to try and model Portus is a valid educational activity; and, that minifigure scale definitely does use too many bricks.

4 thoughts on “The Portus MOOC and modelling”