Having discovered how little I know about statistics. I’ve been looking for a basic course which might equip me to more robustly interrogate the data I might collect for my PhD (or indeed the data I’ve already collected, such as about Ghosts in the Garden). My supervisor found a suitable course at Southampton, but frustratingly (given that its running on one of the days I’m normally free to concentrate on my studies) its at a time that I need to be available for the school-run, as my wife just got a new contract which lasts just a bit longer than the course.

I’ve also been looking on-line. This is the age of the MOOC after all. Most of the courses I found assumed a level of knowledge I realize I don’t have, until I discovered this one, from Coursera. The introductory video convinced me this was going to start with the basics, like standard deviation – which I know of, but damn me if I could remember what it is, or how to do it, if i ever knew. What I particularly liked was instructor Dr Conway’s admission that he’d learned a lot from running the course last year, and had now doubled the length of the course to concentrate on the basics like definitions. This is what I wanted to hear.

If I’d found it when I first realized my need, it would have started at exactly the right time. as it is I’m starting four weeks into the course. I’ve spent the best part of the bast couple of days catching up. I’ve done two weeks worth now and yes its pitched at the right level for me.

The practical elements use a piece of software called R, which seems  a very powerful statistics package. Well, I say package. Its more of a programming language to be honest, command-line interface and all. I bit tough to get  my liberal arts minded head around, but the introduction has been very gentle so far.

I may be a bit quite on here for a while, as I concentrate on this. You want be wanting to hear about my triumph every time I work out how to add a legend to my density graphs after all.

Speaking of which – check out how I managed to add a legend to my density graphs: 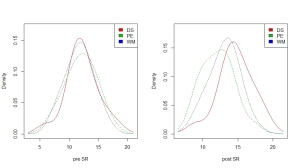 All through the power of code!

Now you can’t do THAT in Excel (well obviously, you can add legends to graphs in Excel, but you’ll have a devil of a job posting the results in WordPress).

4 thoughts on “R me hearties!”